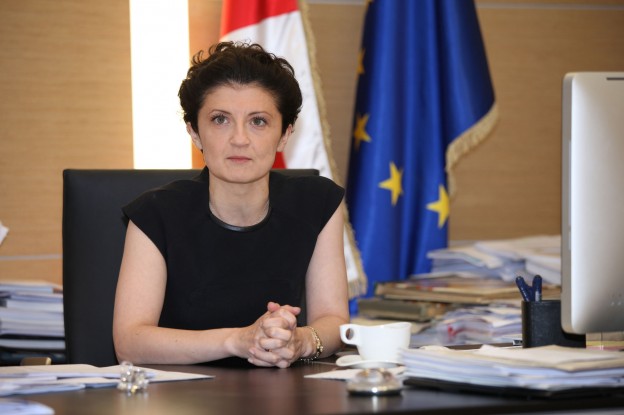 Interview with the Minister of Justice of Georgia, Ms.Thea Tsulukiani

ENIGMMA: Managing migration processes became one of the top priorities for the Government of Georgia. What makes it so important?

Ms. Thea Tsulukiani: Every modern state faces an acute challenge to regulate and manage migration processes properly. Georgia as a country having a key geopolitical location is among them. Having once been a country of origin, today Georgia has transformed into the transit and/or destination country for migrants. On the way to EU rapprochement, Georgia, along with other issues, puts a special emphasis on migration management, trying to adequately assess challenges and make respective decisions. In pursuing the migration related activities, the government of Georgia is acting based on the principle of protection of the rights of its citizens, and considering the international norms. By this very approach the country will be able to gain the positive effect of the migration processes and direct the latter to its own benefit.

For the last years Georgia has made important steps towards improving the management of migration processes. The State Commission on Migration Issues (SCMI) created in 2010 following the EU’s recommendation actively unfolded its activities and has been soon transformed into the main body working on the policy in the field. The Commission also plays an important role in fulfilling the tasks formulated in the Visa Liberalisation Action Plan. To this end, the activities carried out in 2012-2013 are especially noteworthy, when the country’s migration strategy was approved and its practical implementation started. Shortly after adopting the migration strategy, the Ministry of Interior, Ministry of Justice and the Ministry of Foreign Affairs of Georgia have jointly elaborated the new law on the legal status of aliens and stateless persons.

With assistance of the International Organization for Migration (IOM) and the International Centre for Migration Policy Development (ICMPD), the Commission, within the framework of the EU program “More for More” is working on the law on labor migration. Regulating this field of migration is very important for Georgia. Considering the state interests and the situation on domestic labor market, the law will regulate the issues related with aliens’ labor activity in the country, being unregulated until now.

ENIGMMA: What are the recent developments in Georgia in the migration field?

Ms. Thea Tsulukiani: The new Law on Legal Status of Aliens and Stateless Persons adopted by the parliament of Georgia on5 March 2014 introduces new norms for aliens and stateless persons residing in Georgia in correspondence with the international standards.

The necessity of introducing the new law was substantiated by the unregulated immigration processes going on the country due to an extremely open visa policy. At the same time, correct and sensible management of migration processes gains special importance on the way of approaching the EU that should be carried out based on the appropriate visa procedures.

In order to regulate the existing situation, first of all it was necessary to change the existing visa policy, and, based on the state interests and considering international obligations, review the grounds for entry and stay of aliens in Georgia. In line with required changes, it has also become necessary to introduce effective expulsion mechanisms in compliance with international standards, which did not exist previously.

Developing tourism and creating and maintaining increasingly favorable environment for investments is a major priority for Georgia. At the same time, against the background of current challenges and within the framework of ongoing visa dialogue with the European Union, special importance is given to the effective management of migration processes. Considering these priorities and factors, the law does not intend to tighten the visa regime, but instead, create a necessary legislative framework and mechanisms for better managing the flows of aliens entering the country.

Qualified experts were invited from the EU to evaluate the draft law. They offered important recommendations and conducted effective consultation to bring the project into compliance with EU standards. According to the final opinion of the experts, the law corresponds the basic standards established by the European Union.

One of the novelties introduced by the new law is that if an alien did not need a visa for entering and staying in Georgia for up to 360 days, now the period of visa-free stay in Georgia is defined as 90 calendar days within 180-day period. This change is based on the current practice applicable within the EU, in particular, within the Schengen area.

Also, a list of the countries whose citizens have the right of visa-free entry to Georgia is no longer provided in the new law, because a similar list shall be laid down in the relevant ordinance of the Government of Georgia, which currently is being elaborated. The right of visa-free movement will be maintained with the member states of EU, NATO, Schengen, CIS and other main partners; with only change being in the period of the visa-free stay in Georgia, as mentioned above, that will be defined as a multiple-entry for 90 days within a 180-day period.

At the same time, an alien who entered Georgia before enactment of the new law and exercised his/her right of visa-free stay for 360 days, will not be obliged to immediately leave the territory of Georgia upon enactment of the new law and introduction of visa regime with the countries of his/her citizenship, since the same legal regime will apply to his/her visa-free stay as it was applicable at the time of his/her entry to Georgia. Accordingly, he/she will leave the country at the time when he/she would have left if the new law had not been adopted.

ENIGMMA: The Migration Strategy in Georgia was approved exactly one year ago. Could you, please, shortly evaluate the progress done by the Georgian migration stakeholders implementing the Strategy during the last year?

Ms. Thea Tsulukiani: The first strategic document aiming at regulating migration processes was developed back to 90s. However, its implementation had been postponed for quite a long time. The necessity of elaborating a new document has been put back on the agenda, when sixteen EU states and Georgia singed a joint declaration on cooperation within the framework of the Mobility Partnership Initiative. The Initiative aims at fighting with irregular migration and assisting regular migration. Shortly after signing, the working group of SCMI, assisted by the EU experts and international organizations, elaborated the Migration Strategy for years 2013-2015. The Strategy defines a unified vision of the government of Georgia towards migration and reflects the problems that should be solved in order to manage the field successfully.

The document defines four major directions: fighting with irregular migration, assisting legal migration, reintegration of Georgian citizens and shelter policy. For working on these directions, number of important steps has been made: involvement of international and non-governmental organizations in the Commission’s activity has been increased that resulted in positive outcomes – to this end, the elaboration of the new Law on Legal Status of Aliens and Stateless Persons can be mentioned as a successful example; within the framework of the coordinated work of the Commission a new Organic Law on Georgian Citizenship was developed; a single and effective inter-agency Forum was established, which ensures coordinated management and implementation of all projects going on in the field of migration. At the same time, thematic overlap and duplications have been reduced enabling reallocation of existing resources according to the existing needs; a concept of launching informational campaigns in the field of legal migration has been developed and put into practice, based of which preparing a migration textbook is planned. At the end of April, a Memorandum of Understanding between the SCMI and Tbilisi Ivane Javakhishvili State University will be signed on establishing and developing cooperation aimed at conducting research and raising academic qualification in the field of migration. The vital changes took place in 2013 in the field of fighting irregular migration, reintegration of Georgian citizens, studying the impact of circular migration, and granting a refugee and humanitarian status. And, finally, thanks to the joint efforts of all agencies operating in the field of migration, the country has achieved considerable progress in fulfilling the tasks defined to be accomplished in the first phase of the Visa Liberalisation Action Plan, which has been duly reflected in the respective EU report and brought our country closer to European values.

It’s noteworthy as well that under the EU assistance, the Commission, in cooperation with the International Centre for Migration Policy Development (ICMPD) will start working on the strategy for 2016-2020 in the nearest future. The document will focus on the existed strategy, reflect new challenges and incorporate the country’s vision for the next 5 years.

ENIGMMA: The project “Enhancing Georgia’s Migration Management” (ENIGMMA) is one of the outcomes of Georgia’s continued progress in the implementation of the EU-Georgia Partnership and Cooperation Agreement, the EU-Georgia European Neighborhood Policy (ENP) Action Plan, the Mobility Partnership and the Visa Facilitation and Readmission Agreements. What are your expectations from the project? How can the project contribute to the enhancement of the migration management in Georgia?

Ms. Thea Tsulukiani: The project covers the range of issues being a priority for Georgia in the field of migration management such as regulation of labor migration, private data protection, migrants’ rights and visa policy. Each of these directions, in turn, is directly associated with the requirements of the Visa Liberalisation Action Plan and includes both the preparatory and implementation phases. Hence, the effective implementation of the project can positively reflect on the successful accomplishment of the reforms going on in the field. One of the guarantees of this success is the close and productive interaction developed between the Commission and its partners – EU and ICMPD.